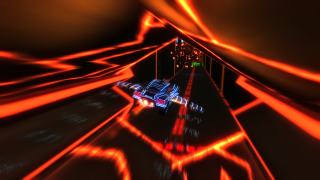 Nitronic Rush is an “experimental, survival driving game” (with wings). It’s the most advanced project I’d worked on to date.
We worked alongside our sister team, “Disco Tank”, whom made the game “Solstice”. Team Disco Tank’s technical director/architect (Robert Onulak) and I worked together to create the “Superdyne” common architecture between our two games. It was additionally used in a couple of homework projects by members of Team Nitronic.

In addition to the architecture, I also worked on some gameplay elements. Among other things, this includes the trick system implementation, achievements, half the level editor (the more data-oriented parts), and the online leaderboards.

The original core team was three programmers, one designer, and one producer. Over time, the producer also worked on code and audio, two more joined to work on music and audio, four artists joined for concept, modeling, and textures, and one more artist for concept.

We worked primarily from May 2010 through November 2011. Typically while carrying a full course load each.